3D scanning is a technique used to capture the shape of an object using a 3D scanner. 3D scanners essentially create the digital copy of a real world object. The result is a 3D file of the object which can be saved, edited, and even 3D printed. This technique captures information like the shape, the texture, the colour, and other details of the object being scanned.

The basic principle is to use a 3D scanner to collect data about a subject. The subject can be:

3D scanning is a significant technology not just for re-creating objects (reverse engineering) or designing models for 3D printing, but also for many other applications. 3D scanning can preserve ancient art and protect it from damage due to wars. It can also be of tremendous value in areas like health care where a fractured skull can be rebuilt using 3D scanned models or prosthetics can be custom made. Even animated movies and special effects are created with 3D scanning. Automotive and aeronautics industries use 3D scanning to create models and designs. 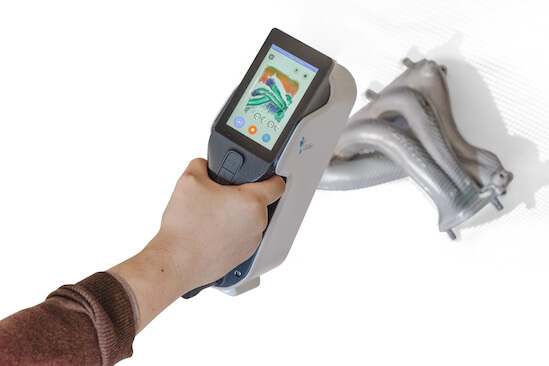 Structured light 3D scanners use trigonometric triangulation but do not rely on a laser. Instead, the structured light 3D scanning technology works with the projection of a series of linear patterns onto an object. The system is then capable to examine the edges of each line in the pattern and to calculate the distance from the scanner to the object’s surface. The structured light used for 3D scanning can be white or blue and generated by numerous types of projectors, such as Digital Light Processing (DLP) technology. The projected pattern is usually a series of light rays but can also be a randomized dot matrix.

The main advantages of the structured light technology for 3D scanning are its speed, resolution and ability to 3D scan people.

One downside of the structured light technology is its sensibility to lighting conditions and issues to work outside.

Laser triangulation-based 3D scanners use either a laser line or a single laser point to scan across an object. The laser is first cast by the 3D scanner. As the laser light reflects off the 3D scanned object, its initial trajectory is modified and picked up by a sensor. From the modification of the laser trajectory and trigonometric triangulation, the system can discern a specific deviation angle. The calculated angle is directly linked to the distance from the object to the scanner. When the 3D scanner collects enough distances, it is capable of mapping the surface’s object and of creating a 3D scan.

The main advantages of the laser triangulation technology for 3D scanning are its resolution and accuracy.

One downside of the laser triangulation technology is its sensibility to the properties of the surface to 3D scan. Very shiny or transparent surfaces are particularly problematic.

Photogrammetry is the science of making measurements from photographs, especially for recovering the exact positions of surface points. Photogrammetry is based on a mix of computer vision and powerful computational geometry algorithms. The principle of photogrammetry is to analyse several photographs of a static subject, taken from different viewpoints, and to automatically detect pixels corresponding to a same physical point. The data input required from the user are the parameters of the camera such as focal length and lens distortion. 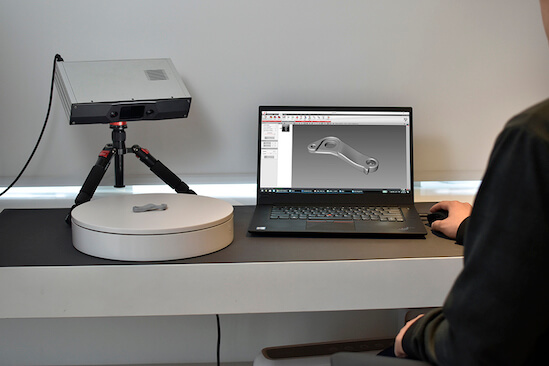 Contact-based 3D scanning is also known as digitizing. The contact technology for 3D scanning implies a contact based form of 3D data collection. Contact 3D scanners probe the subject through physical touch, while the object is firmly held in place. A touching probe is moved on the surface to various points of the object to record 3D information. The probe is sometimes attached to an articulated arm capable of collecting all its respective configurations and angles for more precision. Some specific configurations of contact-based 3D scanners are called Coordinated Measuring Machines (CMM).

Contact 3D scanning is widely used for performing quality control of parts after fabrication or during maintenance operations. The main advantages of the contact technology for 3D scanning are its precision and ability to 3D scan transparent or reflective surfaces.  The downsides of contact 3D scanning technology are its speed and inadequacy to work with organic, freeform shapes.

The Laser pulse-based 3D scanners, also known as Time-of-Flight scanners or Lidar, measure how long a casted laser takes to hit an object and come back. Because the speed of light is exactly known, the time it takes for the laser to do the way back gives the exact distance between the 3D scanner and the object. In order to precisely measure the distance, the 3D scanner computes millions of laser pulses with picosecond (0.000000001 seconds!) accuracy.

Since each measure only collects one point, the 3D scanner needs to cast its laser 360 degrees around that point. To perform this feature, the 3D scanner is usually fitted with a mirror which changes the orientation of the laser.

The main advantage of laser pulse 3D scanners is their ability to 3D scan very big objects and environments. They are, however, quite slow.