3D Printing is a process for making a physical object from a three-dimensional digital model, typically by laying down many successive thin layers of a material. It brings a digital object (its CAD representation) into its physical form by adding layer by layer of materials.

Printing brings two fundamental innovations: the manipulation of objects in their digital format and the manufacturing of new shapes by addition of material.

3D printing is an enabling technology that encourages and drives innovation with unprecedented design freedom while being a tool-less process that reduces prohibitive costs and lead times. Components can be designed specifically to avoid assembly requirements with intricate geometry and complex features created at no extra cost. 3D printing is also emerging as an energy-efficient technology that can provide environmental efficiencies in terms of both the manufacturing process itself, utilising up to 90% of standard materials, and throughout the products operating life, through lighter and stronger design.

The starting point for any 3D printing process is a 3D digital model, which can be created using a variety of 3D software programmes (in industry this is 3D CAD) or scanned with a 3D scanner. The model is then ‘sliced’ into layers, thereby converting the design into a file readable by the 3D printer. The material processed by the 3D printer is then layered according to the design and the process. There are a number of different types of 3D printing technologies, which process different materials in different ways to create the final object. Functional plastics, metals, ceramics and sand are, now, all routinely used for industrial prototyping and production applications.

Types of 3D printing technology - what are they designed for and what are the differences?

There is number of different additive manufacturing technologies used in 3D printers, each of them has it’s purpose and space in the market. The printers themselves differ in terms of technical specifications, capabilities, construction, mode of operation, level of operating difficulty, and time needed to perform 3D printing.

We have prepared a short guide to the most popular 3D printing technologies:

This is the most-used and by default the least complicated method of extruding a thermoplastic material (heated to a certain temperature) onto the worktable and stacking layers of a specific shape. After applying each layer, the working platform is lowered, the next layer is applied – the process is repeated until the finished element is obtained.

The advantage of using this technology is a wide range of materials that can be used (ABS, PLA, PC, PC-ABS, PPSF, flexible materials, with admixtures of wood, carbon or metals, etc.), the ability to build large components and high resistance to fracture. FFF technology is relatively cheap, both in terms of the purchase of the device and consumables – the devices working in this technology is the most on the market – mainly because it dominates the segment of desktop devices and education.

In this technology the material (filament) is wrapped on a spool, which is mounted inside the printer. During printing, the feeder delivers material from the reel and feeds it to the extruder. In the extruder, the filament is heated to the melting point and then flows out through the nozzle, leaving the printing layer on the working platform.

This is a 3D printing technique that involves sintering laser beam. On the work table of the 3D printer, a powdered polymer is sprayed onto which a laser beam is directed and polymer is selectively melted. The working platform is lowered and another layer of sintered powder is created.

SLS technology is in wide use at many industries around the world due to its ability to easily make complex geometries. Its most common application is in prototype parts early in the design cycle such as for investment casting patterns, automotive hardware, and wind tunnel models. SLS is also increasingly being used in limited-run manufacturing to produce end-use parts for aerospace, military, medical, and electronics hardware. On a shop floor, SLS can be used for rapid manufacturing of tooling, jigs, and fixtures.

This is a laser-based process that works with photopolymer resins, that react with the laser and cure to form a solid in a very precise way to produce very accurate parts. It is a complex process, but simply put, the photopolymer resin is held in a vat with a movable platform inside. A laser beam is directed in the X-Y axes across the surface of the resin according to the 3D data supplied to the machine, whereby the resin hardens precisely where the laser hits the surface. Once the layer is completed, the platform within the vat drops down by a fraction (in the Z axis) and the subsequent layer is traced out by the laser. This continues until the entire object is completed and the platform can be raised out of the vat for removal.

In terms of other post processing steps, many objects 3D printed using SL need to be cleaned and cured. Curing involves subjecting the part to intense light in an oven-like machine to fully harden the resin.

Stereolithography is generally accepted as being one of the most accurate 3D printing processes with excellent surface finish. 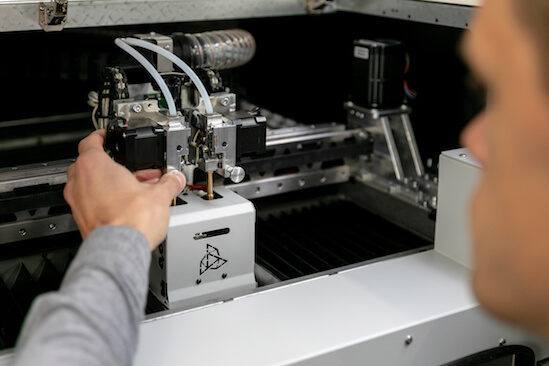 This is a similar process to stereolithography in that it is a 3D printing process that works with photopolymers. The major difference is the light source. DLP uses a more conventional light source, such as an arc lamp, with a liquid crystal display panel or a deformable mirror device (DMD), which is applied to the entire surface of the vat of photopolymer resin in a single pass, generally making it faster than SL.

Also like SL, DLP produces highly accurate parts with excellent resolution, but its similarities also include the same requirements for support structures and post-curing.

Using this technology the material being jetted is a binder, and is selectively sprayed into a powder bed of the part material to fuse it a layer at a time to create/print the required part. As is the case with other powder bed systems, once a layer is completed, the powder bed drops incrementally and a roller or blade smoothens the powder over the surface of the bed, prior to the next pass of the jet heads, with the binder for the subsequent layer to be formed and fused with the previous layer.

Advantages of this process, like with SLS, include the fact that the need for supports is negated because the powder bed itself provides this functionality. Furthermore, a range of different materials can be used, including ceramics and food.

The parts resulting directly from the machine, however, are not as strong as with the sintering process and require post-processing to ensure durability.

This 3D printing process whereby the actual build materials (in liquid or molten state) are selectively jetted through multiple jet heads (with others simultaneously jetting support materials). However, the materials tend to be liquid photopolymers, which are cured with a pass of UV light as each layer is deposited.

The nature of this process allows for the simultaneous deposition of a range of materials, which means that a single part can be produced from multiple materials with different characteristics and properties. Material jetting is a very precise 3D printing method, producing accurate parts with a very smooth finish.

This 3D printing technology, also known as Direct Energy Deposition, creates parts by directly melting materials and deposing them on the workpiece, layer by layer. This additive manufacturing technique is mostly used with metal powders or wire source materials. In addition to the capability to build parts from scratch, DED is also capable of fixing complex damaged parts, such as turbine blades or propellers.

Typical Directed Energy Deposition consists of a nozzle mounted on a multi-axis arm inside a closed frame, which deposits melted material onto the workpiece surface, where it solidifies. The process is similar in principle to the material extrusion 3D printing technique, but with DED, a nozzle can move in multiple directions, with up to five different axes.

The Direct Energy Deposition term can encompass several different technologies. They distinguish themselves by the way the material is fused, each suited for different and specific purposes. The most popular are as follows:

This 3D printing technology also called Direct Metal Laser Sintering (DMLS). The same technical principle is used to produce Selective Laser Melting (SLM) and Direct Metal Laser Sintering (DMLS) parts, but is exclusively used to produce metal parts. SLM achieves a full melt of the powder so that single-component metals, such as aluminium, can be used to create light, strong spare parts and prototypes. DMLS sinters the powders and is restricted to alloys, including titanium-based alloys. These methods require added support to compensate for the high residual stress and to limit the occurrence of distortion. Applications include jewellery and dental industries, spare parts, and prototypes.

This 3D printing technology attains fusion with the use of a high-energy electron beam and produces less residual stress resulting in less distortion. By means of movable electron beam, metal powder is selectively melted locally layer by layer, thus solidifying a cross-section of the component. It uses less energy and can produce layers faster than SLS. This method is most useful in high-value industries such as aerospace and defence, motor sports, and medical prosthetics.